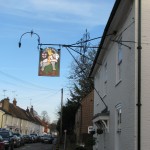 Eliza Banting was born 1819c, in Hambledon Hampshire, the daughter of George Banting and Mary Gover.

In 1844 she gave birth to an illegitimate son, Henry, who was looked after by his grandparents whilst Eliza went into service for Sir James Campbell and his wife who lived in Soberton Hampshire, where she was working at the time of the 1851 census.

In 1865 Eliza married  George Dancaster, he died after two years and Eliza became the inn keeper of the George Inn in East Street Hambledon and there she ruled for about fifteen years.