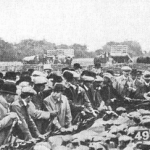 The first Banting to put in an appearance to the Hambledon parish records was the baptism of William in 1792.

Weyhill was home to one of the most important fairs in the country in regards to the number of sheep sold, as well as being renowned for the hops and ale it also sold.

It found it’s way into the stories and songs of it’s time and it’s history makes for fascinating reading.

The question therefore is, why leave?

What drove John and Ann to up sticks and move a distance of 35 miles and 11hours walk?

The history of the period probably gives us the answers

But why choose Hambledon?

Another post on Hambledon history may give a clue to this…