Arthur Banting was born in Hambledon in 1895 but by the time of his marriage in1927, he had moved to live in what is now 137 The Causeway Petersfield.

This is an account of his occupation at that time as given by his son Arthur.

‘My father worked for Sam Hardy, a gent, well known in Petersfield. He lived in the Spain, the cottage there is still called Hardy Cottage. Sam Hardy kept hounds and horses and it was my dads job to look after them. His hunting lodge was in the Causeway (Mrs Bakers old house) and the kennels were opposite, next to the Jolly Sailor pub. The kennels had statues of dogs on the roof. Sam Hardy had a massive coach and this was kept in a tin shed and dad had to look after this as well.

Dad also worked as a coachman on the Petersfield to Portsmouth coaches.’ 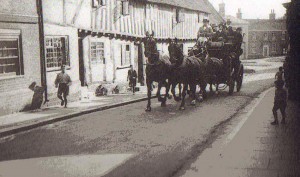