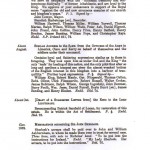 Most of the volumes contain abstracts of correspondence with the Lord Lieutenant and other officials but the first 150 pages consists of petitions made upon the restoration for land and offices that had been lost during the Commonwealth.

‘We have no sympathy with the inhuman treachery and contemptuoous disloyalty of former inhabitants and are loyal to the King. We approve of your endeavours in support of the Royal cause against the old and erroneous enemies of our church and kingdoms peace’

A similar address is made in about August 1662 from the officers of the army in Limerick, Clare and Kerry on behalf of themselves and the soldiers under their command. James Banting once again signs.

This is most probably the same James Banting as can be found on the 1659 census. So we now know he was an officer in the King’s army in Ireland

To find out more about the history of Ireland and why James Banting was there read this short history, it puts the whole affair into a nutshell